A soft cry emerged from deep in her throat as she lifted the bone structure of her wings. Each movement was drenched in agony, but she was surprisingly steady. She could feel the cool night air along the exposed nerves, alighting shards of pain that caused her body to tremble faintly. Torn muscles and tendons lamented the need for movement as the bones slowly rose higher and higher around her. Blood ran in tiny trails along the bones and dried along the edges or dripped off the tiny bits of flesh that remained.

Reluctantly she opened her eyes and looked out at the water in despair. The water reflected the deep darkness of the night sky, making the vista an interminable view of tenebrous light. Eyes lowered to the water before her so she could consume her reflection along the mirrored surface. A deep breath lifted her hunched shoulders momentarily as if she were breathing in the horror at the sight of herself in the water.

She wanted so desperately to be filled with the same anger that incited them to do this to her. She wanted to feel the wrath well up from inside and consumer her like the ravenous beast they claimed she was. She wanted to feel it pulse in her temples and drive her muscles. But she felt nothing, nothing but exhaustion, a deep fatigue that weighted along every limb of her body. 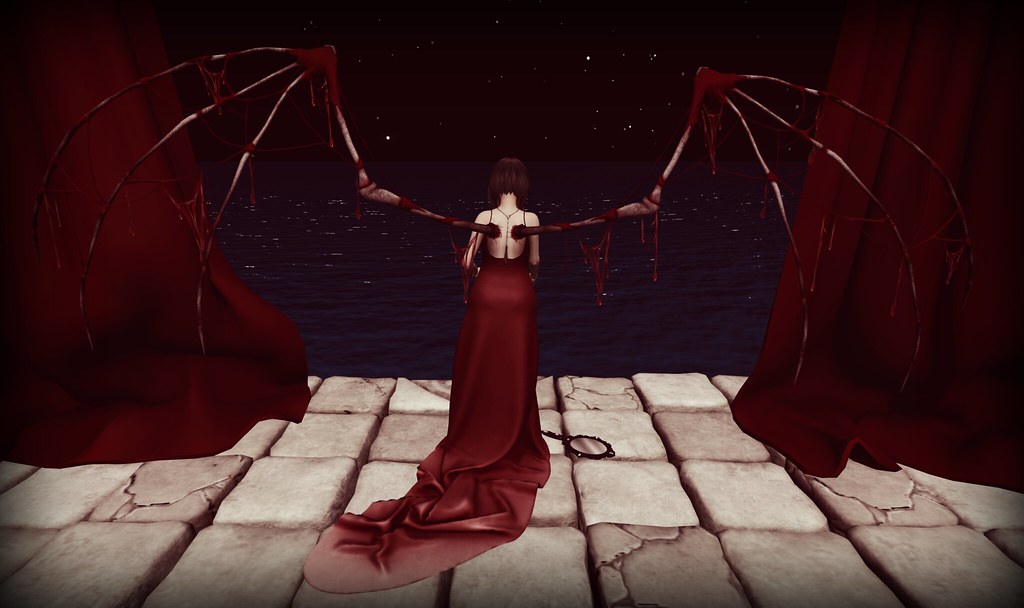 So, this gorgeous gown was released at We Love Roleplay by Valentina E. It now comes with a fitted version for Maitreya, but the straps still don’t have the greatest fit. I don’t care. The gown is still freakin’ gorgeous, as usual from V.e.  Also, these amazing wings from Jian were released at Festival of Sin. They are absolutely beautifully grotesque. The wings come mod, but cannot be sized down in one piece. These are the size they came and are quite large, so be aware of that when purchasing them.