By all appearances, they shouldn’t have been together.

His English was painstakingly proper. Each syllable was enunciated distinctly, and that precision came with a strange ease of comfort from familiarity. This same precision and comfort repeated itself in every aspect of his life. His movements, the manner of his dress, the way he ate a meal – all followed the manner of his speech – that odd combination of exactitude conjoined with ease from a lifetime of presenting himself this way. His words and his movements were moderated and slow.

But her words were broken. Sentences flittered out of her mouth rife with slang and words contracted and shortened with a quick tongue. Often her sentences were punctuated with giggles or a word that made the professor blush. She also blushed, but not at the profanities that escaped her lips when frustrated with another machine that refused to do as she commanded. She carried a wrench like a sceptre and dared her machines to disobey her orders. And they did dare. It was their daring which showed in long rivulets of oil that dripped down her legs and arms. It was their daring which splattered across her face and caught in her hair in clumps. Her movements also emulated her speech – quick, angular, and often incomplete.

To be sure, they were a strange combination, but they leaned into each other. Their styles complemented each other, made them an efficient and rigorous combination, which reflected in their work life, but also their private life. Their intimacy was one of respect, an understanding that each brought something the other needed. 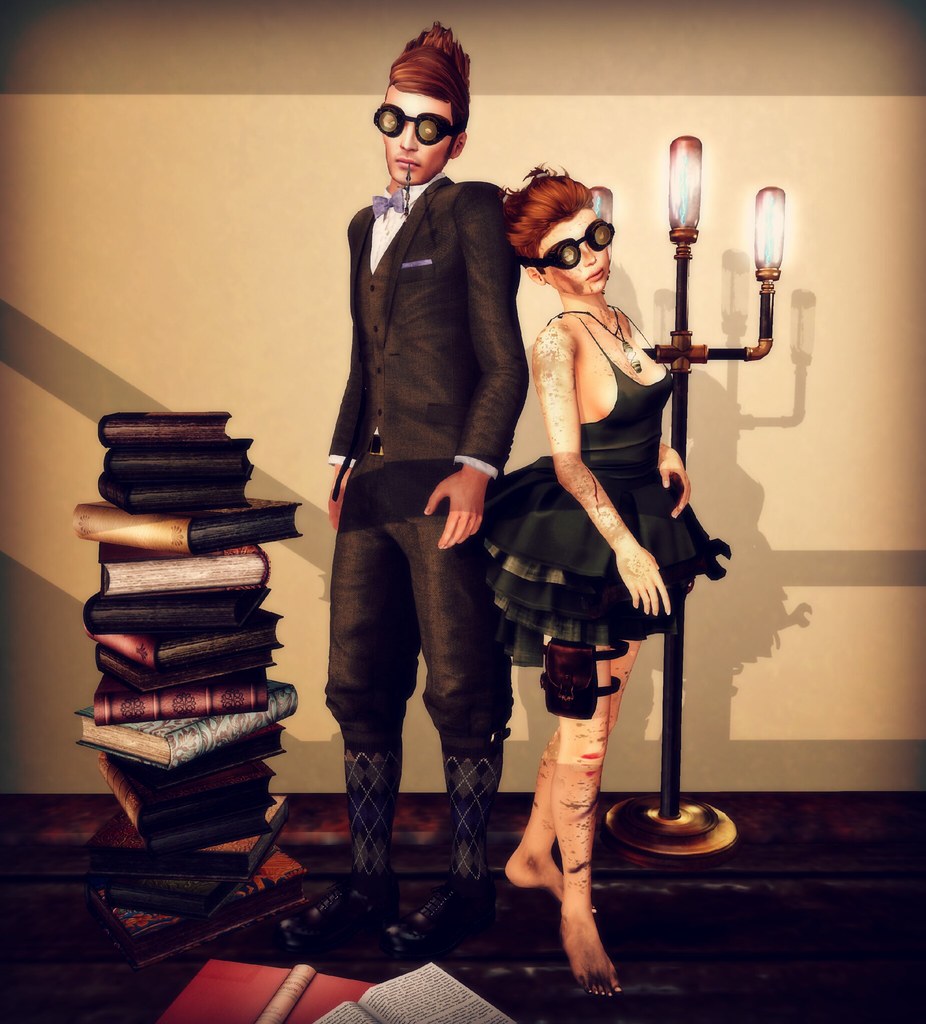 A very dear friend of mine from a small store called Amalgamation created some steampunk goggles that are rich in detail, and he needed some photos. Thus, a steampunk post was borne. Yes, thus! xD

I love decorating with books and scattering them around my parcel. So, I was pretty ecsatic about the Literati set released by Stormwind at WLRP this round. There are many different configurations of stacks and piles, and vertical groups and single pieces. And each of these configurations is texture changeable with the HUD. 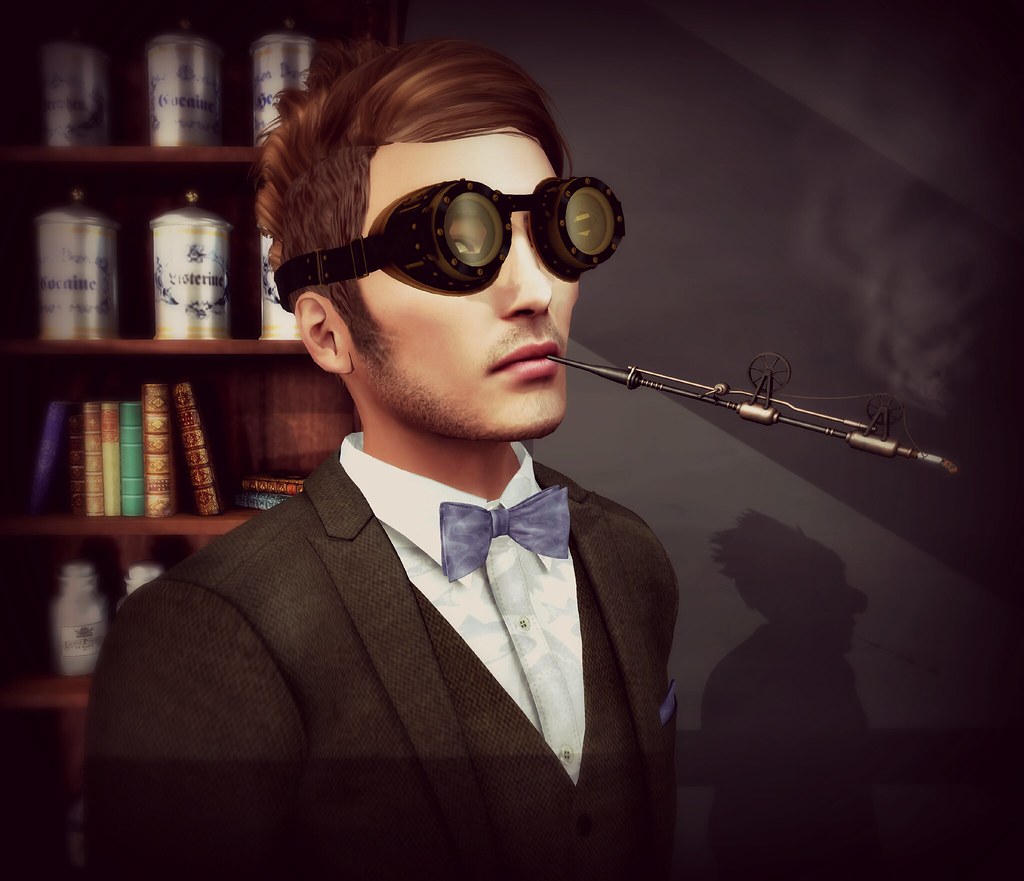 Also released at WLRP, is this incredibly detailed stimstick by NOMAD. Each color comes with two versions. One version has the steampunkish cogs, the other is a bit simpler in design. 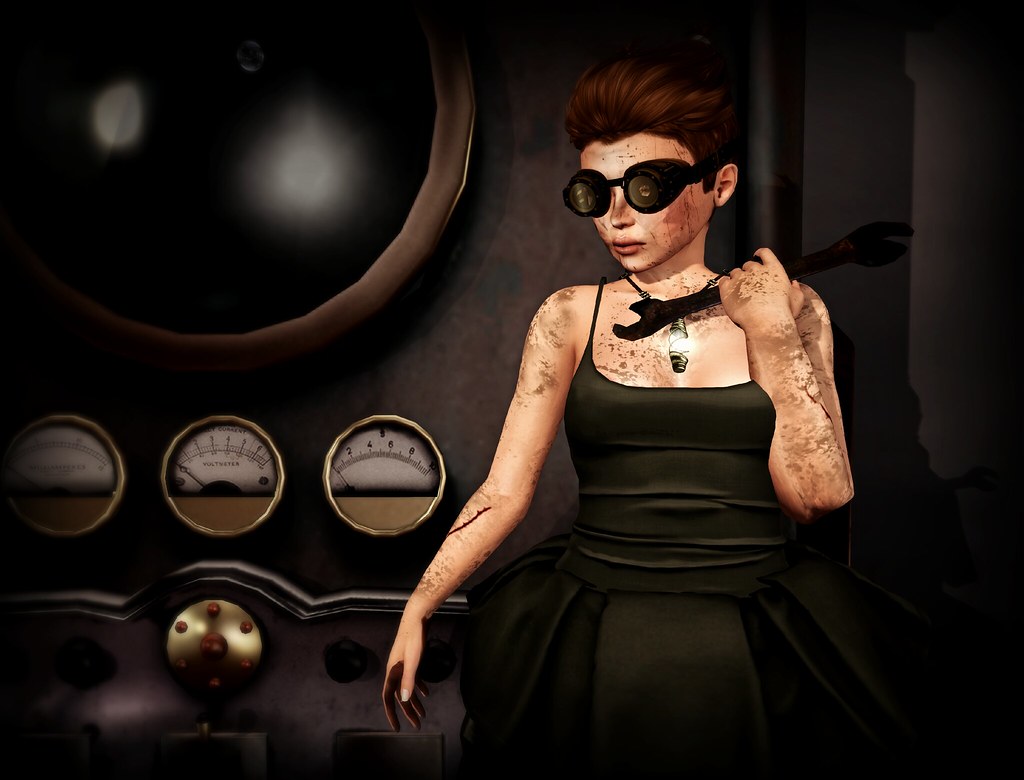 The Mix also started a new round. The Mix is an event where you pick up a HUD and it lists all the stores that are participating that round. Each store is color coded to show if it has a sale item, a new release, or an exclusive item. Valentina E released an exclusive color of this Hand Me Down Ballet Dress. More details for The Mix and how to get the HUD are here.