“She is a mermaid, but approach her with caution. Her mind swims at a depth most would drown in.” 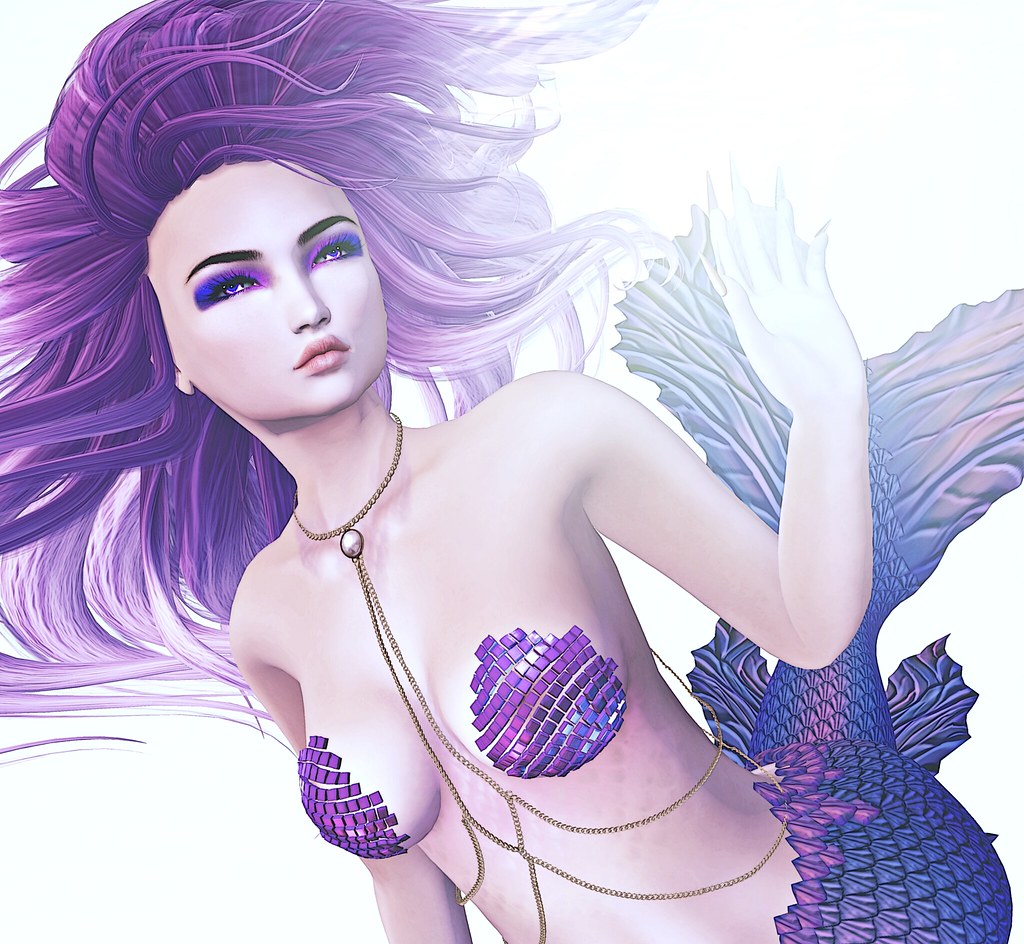 Hello, Bloglings! A new round of We Love Roleplay is upon us (and has been since the fourth). Zibska is one of my favorite make up creators. She creates these beautiful, bright colors and dramatic makeups that are perfect for powerful looks. Also, at this round are some really lovely eyes from Gauze and this beautiful body chain by sYs, which comes for allthefuckinbodies (Maitreya, all three Bellezas, TMP, and both SLinks) and even an unrigged version. So, go snap it up because you can never have to many chains to dangle delightfully across your delicates.

While you’re out shopping, you might as well pop on over to Rewind, because this amazing bra? …um… pasty? erm…boob cling! is there. It comes in a variety of colors, but it is only for you Maitreya gals.

Then just take a quick TP to Fantasy Gacha Carnival, because you know there is nothing more rewarding than trowing Lindens away on shit you don’t want on the off chance you might get something you do want…like this fucking amazing hair.

END_OF_DOCUMENT_TOKEN_TO_BE_REPLACED

The future is a fragmented and varied thing. It reveals itself only to those with the strength of mind to see it and to understand its ambiguity. She followed the fragments like veined roads on a map. Some roads were certain and prevalent. It seemed as if all other roads spawned forth from them. Other roads were hidden trails, breaking through the thicket in a forest of uncertainty. One could spend their whole lifetime monitoring these roads, looking for signs and indicators of what may come to pass. It was an exhausting task, the future whirling around her, claiming her, blinding her, and binding her to a time which was not her own. But it was task that was part of her soul and her very being.

Hello, bloglings! In case you’ve forgotten, We Love Roleplay is still selling tons of amazing roleplay gear and free Christmas presents. One item being sold by aisling is this beautiful blindfold. It comes with an extra forehead bindhi and a necklace to match. All are included with a color matching HUD for your color indecisiveness (if you’re anything like me anyhow).

The Fantasy Collective just recently opened with a special holiday gacha round. This round includes loot boxes for rares. So, each rare has three items in it. Yay! Three items in one. So, I waited specifically for this event to open because I wanted this shroud by Stitched. It fits really well. I used the no-hair version with the Truth bangs group gift.

END_OF_DOCUMENT_TOKEN_TO_BE_REPLACED

Hello again, bloglings. We Love Roleplay is opening its doors again today to bring us our favorite fantasy stuff around. This month, E.V.E. released this dramatic neck piece, that I found perfectly fitting for a dark queen. Gauze released these dragon fades appliers for both hands and feet. They’re subtly scaly and absolutely fantastic.

Don’t forget Gacha Garden is open now with tons of free gifts. So, stop on by play a gacha or two and pick up some freebies to fatten your already bursting inventory.

Also, The Coven is a new event focused around the occult. While I was there I found this hair by Love which looks as if it has been captured by the wind.

END_OF_DOCUMENT_TOKEN_TO_BE_REPLACED

The austerity of her facial features, the hardness of its lines, and cruelty of her stark brows were, in a strange way,  tempered by her ease of movement. A skirt slung loosely around slim hips which swayed around her feet and whispered softly against the ground. Even the solid steal flail hung precariously across delicate shoulders swung at her side as if it were a delicate glass bauble not an instrument of harsh brutality. Dark wings hung behind her; the glossy, inky feathers matched the raven which perched on the handle of her flail.

A softness resonated in her eyes, contradicting the harshness of her cheekbones and jawline. Those eyes burned with a warmth of compassion and understanding that her victims did not expect. When she passed over battlefields to choose those to take and those to leave behind, when people wounded and weary from battle, gazed about and saw her face, they did not expect the depth of compassion and concern in her eyes. And when they begged her for more days, more days to struggle for causes in which they believed, more days to win victoriously against their foe, more days to be able to march home with their fellow warriors, they did not expect to see tears gather at the corner of those vermilion eyes, and run in rivulets along her cheeks. But her task was not one she chose, and the powers and balance of life and death was not something within her grasp. She was but a servant, a minion, to forces much greater than she. It was a burden which rested heavily along her shoulders and deep inside of her heart. It was a burden which seemed much too heavy for someone of her slight build, but which she carried with an unexpected ease.

Hello, bloglings! WLRP is still open and sYs released this beautiful feather collar which is fitted for mesh bodies. They also have a matching, high-waisted,  feathered miniskirt, which I am not wearing. It comes in two cloth versions black and brown, and each comes with a  HUD for changing the texture on the feathers. Chapter 4 also opened earlier this month and with it Storybook released this perfect skirt. I have a love for floor length, bohemian skirt. This one is perfect. For me, it is where is rests along the hips that is EVERYTHING and this one is slung just low enough. So, if you passed over this simple but versatile piece, go back. Go back, now.